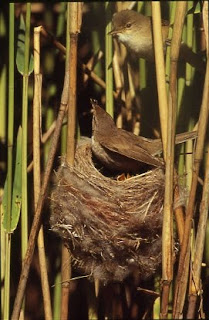 The catching yesterday of an adult reed Warbler with ring number P503386 sent me racing to my computer when back home. I knew that P rings were used about 10 years ago so this bird was obviously quite old but would it be a record age for our study at Leighton Moss? I quickly discovered that it was ringed as a young bird on 23/08/01 so it was 9 years and 261 days since it was first ringed. But it was obviously 10 years old, Would this be our record for longevity in this species? A quick look at another file and I discovered that our previous oldest bird was 9 years and 263 days after ringing! So it had missed the record by just two days.

Nationally the oldest British ringed Reed Warbler was 11 days short of 13 years so our bird has a bit to go yet. Reed Warblers are well known for their longevity, in the same catch we had one bird 6 years old and 2 each at 5 and 4 years old.

Visiting bto.org/ring I found that the oldest British ringed Sedge Warbler was only 8 years and 8 months. Blackcap and Willow Warbler both 10 years and 8 months. Why Reed Warblers should be so long lived compared with these other warblers is interesting .But most amazing of all is the thought that this little gem has navigated to West Africa and back on 10 occasions!
Thanks to David Mower for the photo.
John
Posted by North Lancs Ringing Group at 16:22