Its certainly been a disappointing season for the tits in my nest boxes. I study 5 schemes spread through woods from the coast, through the willow scrub of Leighton Moss to the Oak woods of the Lune valley. I have compared the results for this year with 2014 which was an excellent year. In total this year I had boxes occupied by  58 Blue Tits and 53 Great Tits, compared with 60  Blue Tits and 71 Great Tits in 2014.

Total failures due to predation, desertion or the young dying increased markedly this year. In 2014 total failures was only 10% in Blue Tits and 15 5% in Great Tits . This year this has increased to 40% and 53 % respectively . The increase has been mainly in the whole brood of  chicks dying usually a few days after hatching or to desertion in the egg stage.

We had a most welcome increase in Pied Flycatchers with 26 occupied boxes compared to 16 in 2014. Total losses though have risen from just 6% in 2014 to 41% this year. This was due mainly to predation (probably weasel) in the higher section of the main wood. The only losses of young were of three nests in an alder wood. Brood size was similar with 6.6 in 2014 and 6.3 this year.

This years poor results  must be due to the cool wet spring  producing a decline in caterpillar numbers especially early in the season when most of the losses occurred. 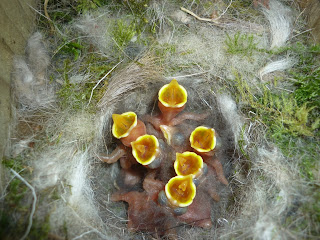