Recent recoveries from the Ringing Office included the Group's first Redwing in Iceland. This bird was ringed by Mark on the edge of Bowland on Boxing Day 2014 and found dead in cold weather in SE Iceland on 26 April this year. Whats unique about that? Well its the Group's first passerine to be reported from Iceland but the interesting question is, was it one of the Icelandic race coburni? The Migration Atlas (2002) says that the Icelandic race winters exclusively in Ireland and  Northern Scotland and there were no ringing recoveries of this race in England or Wales so this bird may be one of the first. However the timing of the recovery does not rule out vagrant spring passage of the continental race iliacus.

In total the group has ringed 2733 Redwing most of them at winter roosts. The map below shows the recoveries of this wintering thrush. The black spots are birds reported in the same winter as ringing showing that some birds move to Ireland and France in  severe winters. The red dots are birds reported in subsequent winters proving conclusively that  birds can change their wintering areas from winter to winter. Not a good idea really as all the southern European birds and the one in Azerbaijan were shot! 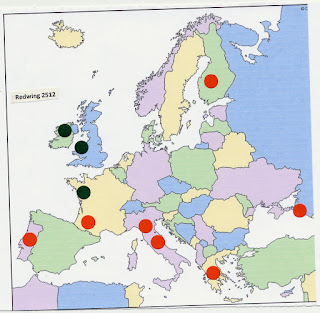