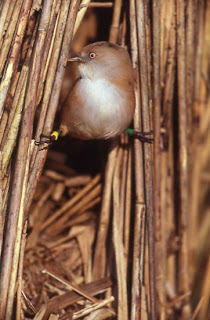 I have several pairs of Bearded Tits nesting in my reed wigwam nest boxes this year. I visited one on May 4th and it had two eggs. When I next visited 20 days later  I estimated the clutch by feeling gently  at 7-8. but some eggs were piled on top of others. It is impossible to see into the nest through the small entrance hole as shown in the photo to get a more accurate count. When I went to ring the young today I was amazed to find five healthy young and five eggs . The largest clutch I have recorded before has been 7 and the usual clutch is 5/6. One can only assume that two females had laid in the one nest. I watched the  colour ringed adults feed the young  for one and a half hours and only recorded a male and a female feeding ca every four minutes.  They were both 2011 young birds and they had been recorded together acting as a pair on seven occasions in October/November last year. Another example of early pair formation in this species.