Ospreys on The Move 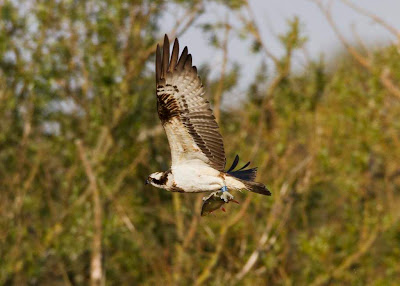 This  stunning shot of a colour ringed Osprey was taken by Mike Roberts at Leighton Moss on the evening of May 7th. it was one of three seen that evening.

My impression is that it has been  a very good spring for Osprey passage through our area with at least 20 reports from both Leighton and the Lune area and several others elsewhere. The early birds are probably from the Scottish and Lake District breeding population. But the later birds, such as this one, are young birds not yet old enough to  breed. The young Ospreys mainly spend their first year in West Africa but in their second year they return to the breeding areas to check out possible breeding sites for the future. This bird was ringed in the Scottish Borders at Elibank Forest as a chick from a brood of two on 12/07/2010. So fits in quite nicely with the general pattern of movement described above. Lets hope it  finds a suitable place to breed in our area  in future years.

The second brilliant shot shows that Leighton's  resident Marsh Harriers don't really welcome Ospreys. The Marsh  Harrier doing the chasing of an un-ringed Osprey is the young female that spent the last winter at Leighton and very distinctly identified by the missing feathers in the wing. 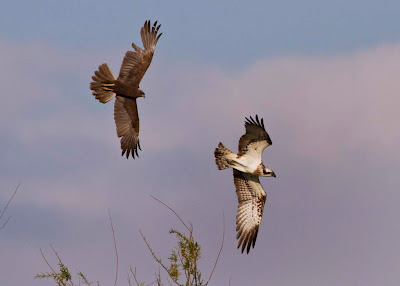 Many thanks to Mike Roberts for allowing us to use his great action shots.
John
Posted by North Lancs Ringing Group at 16:56