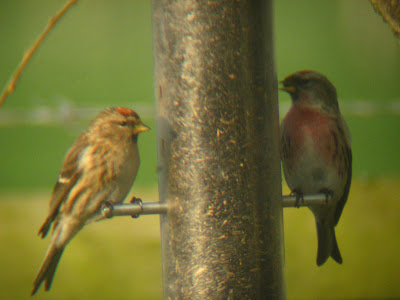 With the garden ringing season ending I thought it would be interesting to look at the changes in populations of birds ringed in Andrew Cadman's garden at Over Kellet over the past 12 years.

Andrew has only a small garden just 10 m by 8 m. right on the edge of the village. He keeps it well stocked mainly with sunflower hearts and a little nijer and his ringing effort has been reasonably consistent over the period.

Perhaps the most interesting finding has been the build up of Bullfinch and Lesser Redpoll in recent years. The first Bullfinch were caught in 2005 with just seven ringed. For the next three years no more than four occurred then in 2010 19 were ringed and in 2011 an amazing 36 were caught. The increase in Lesser Repolls has been even more dramatic with the first (1) in 2008. By 2010 26 were ringed and in 2011 an incredible 62 were caught.

Goldfinch have been garden feeder birds for much longer with 32 ringed as long ago as 2000. But they too have increased dramatically in recent years to reach a peak 360 in 2010. Greenfinch have always been regular garden feeders but Andrew's ringing totals show a reasonably steady population of between 30-50 from 2000 to 2008. There then followed a catastrophic decline in 2009 when only four were ringed. This coincided with the nationwide outbreak of trichomonsis disease. However they bounced back in 2010 when 185 were ringed and reached a peak of 216 next year.

The most irregular visitor has been the Siskin which usually visit in late winter into early spring. From 95 in both 2000 and 2004 to none at all in 2005 to an amazing 334 next year then only four in 2007. Small numbers only until 91 in 2011 and 76 this last late winter -spring. The 740 Siskin ringed have produced a picture of their movements. Birds caught on spring passage have been found wintering in Shropshire , Hertford, Hampshire and Northern France. During the breeding season they have been found in Highland (6) Aberdeen (2) Argyll and Bute (2) and Sweden .

Of other regular species there has been less spectacular fluctuations in population but just to give some idea of the other regular species visiting the feeders the peak numbers ringed in a year have been Blue Tit 261, Great Tit 72, Chaffinch 109 and Coal Tit (63).
John
Posted by North Lancs Ringing Group at 19:34