Two controls received today,  both at Icklesham in East Sussex on the south coast are good examples of the  quick movement of our summer visitors at this time of year. - A Sedge Warbler on July 31st just six days after ringing and a Sand Martin on August 6th 12 days after ringing both were juveniles and involved movement of 425 kms. They set me looking back at our data set for these two well ringed species.

The Sand Martin  in Sussex is the 141st ringed by the group to be controlled there! We have 58 reports from Western France, 16 in Spain and six in Senegal in West Africa. There are fewer quick movers than Sedge Warblers mainly I feel because almost all Sand Martin ringing is at the breeding colony and most birds are recently fledged youngsters. However we have 2 under 10 days and 10 under 20 days. Of French controls we have one 10 days after ringing and another 17 days.
John 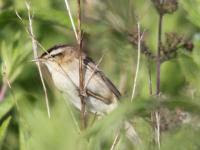