Gritting is now in full swing at Leighton Moss RSPB Reserve especially on fine reasonably calm days. Although a few have ventured out on less attractive days. To date I have received 201 daily sightings of colour ringed birds although there are a few unringed birds around.

To date we have recorded 52 different birds visiting the trays, the make up of the sightings is shown in the table below.

To date we have colour ringed 30 young birds in 2017 so two thirds of these have visited the trays. The reserve staff have now put out trays in two new areas near the Griesdale and Jackson Hides. To date there has been no reports of birds using these. 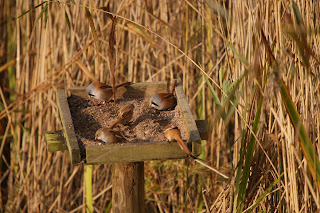