The good weather of the last two days brought good ringing conditions and a marked improvement in catch size. Highlights were the  9 juvenile Bearded Tits, six of which were new bringing our total for the year to only 9 compared with 64 in the same period last year.

In our first round on the first day we caught a French ringed  Reed  Warbler and later a British  Reed Warbler  control.  To date for our RAS study we have caught 68 adult Reed Warblers. This compares to 82 in the same period last year. The first bird caught today was an adult female Cetti's Warbler our first for this year, there are at least 5 males singing on the reserve. We also caught the first juvenile Blackcap , Willow and Sedge Warblers and Chiffchaff of the season.

Blue tits were  a little better  with 6 juveniles caught still down on  the 42  caught in 2014 and surprisingly 5 juvenile Coal tits, we only ringed 2 in the whole of July last year. 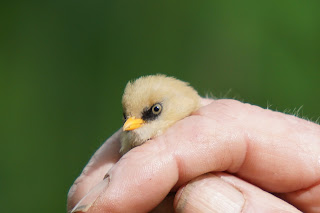