Spent an interesting time getting the colour ring combinations of another pair which have 5 young about 3 days off fledging. They are  nesting in a two year old reed  nest box. We usually replace the reed wigwam nest boxes each year but I had left this one in as it seemed in good condition. Within  three minutes of getting into position the female was back feeding the young and I read her colour rings at the first visit. The male though appeared only briefly in the reeds at the back of the nest. I started to wonder if the presence of  my hide was putting him off as the female fed every three to four minutes. But then I realized that he  was entering the nest box via a hole in the back of the nest box to feed the young and all I saw was his head. So the female was using the front door and the male the back door!. After ca an hour I managed to read his ring combinations. The photo below by David Mower is not of this female but was taken several years ago but shows the type of nest box we use. 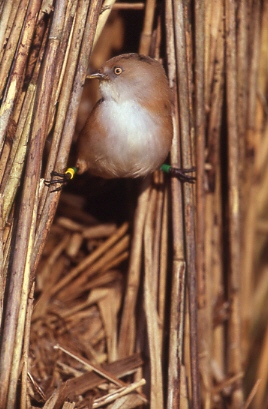 The female is 4 years old and for the last three years had been paired with the same male and nested in the same area of the reed bed. They were together on the grit trays  up to late November 2012. However this year she is nesting with a different male, a three year old bird. So probably her former partner has died.This is the third brood so far this year and all three had both parents adult birds.

There are three other nests which are only just starting incubating. We got the colour combinations of one pair and they were both ringed as nestling's  last spring so are breeding for the first time. Interesting that they have nested ca three weeks later than the adult birds. They were re-trapped together on July 9th and September 18th and seen together on the grit trays on October 30th so had formed a pair fairly soon after fledging something we have recorded on many other occasions and seems to be normal in this species. This pair is featured on the RSPB Leighton Moss live Web Cam.
John
Posted by North Lancs Ringing Group at 20:02