At a recent group meeting we discussed the results of ringing at feeding stations. I analyzed the results from two of our sites. One is a typical small garden in the  village of Over Kellet and operated by Andrew. The other which I operate is a woodland station at Teddy Heights near Arnside. The results for some of the species caught this winter compared with the previous five winters are given below. Ringing effort has been roughly similar over the years.

Coal  Tit.
This winter has seen the largest  catches to date at both sites with Teddy Heights at 164 being  34 up on the five year average and Over Kellet at 40 compared with 22. At both sites there was a very marked influx from September on right through until late December . Numbers then declined until a small further influx in early March. A first calendar year bird caught at Teddy Heights had been ringed 63 km to the  north in Cumbria in early October giving some clue as to where these birds come from. The oldest bird caught was three years and 28 days after ringing

Blue Tit
The 120 caught at Teddy Heights was the lowest number over the 20 years I have been operating the site and was well down on the average of 180 of recent years. By contrast Over Kellet at 145 was only 14 down on recent averages. Data from the Groups nest box studies suggested rather poor productivity last spring and the poor summer and autumn weather would probably not have helped survival. The oldest bird recaptured was eight years and 15 days after ringing.

Great Tit
The Teddy Heights catch at  84 was well down on the recent average  of 141. The smaller sample at Over Kellet at 28 was  only slightly down on recent years. Again nest box studies suggested well below average productivity. The oldest bird was five years and 115 days after ringing.

Chaffinch
Total catches at both sites were slightly up on recent years, suggesting a good population. The oldest bird was six years and 12 days.

Greenfinch
This species is only captured in numbers at Over Kellet. The population was quite high  until a collapse in the 08/09 winter reaching a low of only 15 in the 09/10 winter. It was thought the the disease Trichomonosis was the cause of the decline. However  they then bounced back to a total of 142 in  both of the next two winters. But this winter has seen a decline again to only 33.

Goldfinch
This attractive species has been the star turn at Over Kellet with 144 caught, slightly up on the average catch of recent years although somewhat down on the 250 recorded in the 2010-11 winter. One notable feature of the catch is the low re-trap rate with very few returning in successive winters. Of 1244 ringed over the last 12 years only three have returned in successive years. 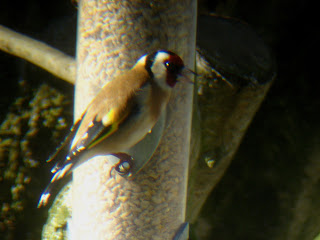 Bullfinch
This species  first started visiting feeders at Over Kellet in the 2006/.07 winter and ten were caught. They fluctuated over the next few winters to reach a peak of 43 in the 2011/12 winter. This winter though they have declined with only three caught. At Teddy Heights in a Bullfinch breeding habitat the numbes were around the average.