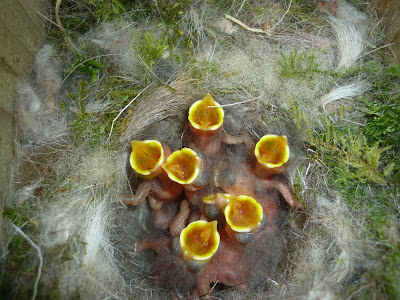 A wet and windy morning allowed me to sort out the nest box details for my three lowland study areas in the Arnside/Silverdale AONB. My impressions were that it had been a rather poor season so it was interesting to look at the figures for Blue and Great Tits. Of the 50 Great Tit nests recorded 37 (74%) produced some young. However brood size at fledging was only 4.3. The lowest I have recorded over the past 12 years. Blue Tits occupation rate is always lower with 35 nests of which 21 (60%) produced young. Brood size was higher than Great Tits at 5.9 but still well down on previous years. The very changeable weather this spring has certainly taken its toll. One other factor has been the number of broods taken by Great Spotted Woodpeckers enlarging the hole and taking the chicks. A total of six in all, three of each species. No doubt the young tits shouting for food attracts the woodpeckers which also may have been struggling to find food. John
Posted by North Lancs Ringing Group at 12:15