Cetti's Warbler The Next Installment 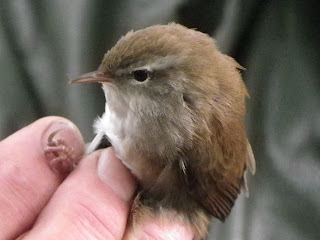 Cetti's Warbler are certainly a potential colonist in our area but to date there is no definite proof of breeding. The first bird was caught at Leighton Moss as long ago as 1995. This was followed by singles in 2007 & 2008, three in 2009 and seven in 2010. To date this autumn we have caught four, two each of males and females. One of the females had been ringed in October 2010. In the 2010 autumn we also retrapped two birds from previous autumn's one from two autumn's previously. Are these birds returning to a prefered wintering area or have they bred undetected close by?


That they are capable of quite long movements was shown by a male which we ringed on 13/03/10 which was caught on 25/04/11 near Portsmouth 389 km SSE. This is the second longest movement of any British ringed Cetti's Warbler.

Perhaps the most interesting thing about the bird to Portsmouth is it is the only spring Cetti's warbler capture at Leighton. All the others have been mid September to 31st December. Was the March bird on its way south from somewhere further north?

Why do they go north in Autumn when nearly everything else is going south?