Redpolls and Siskins on the Move 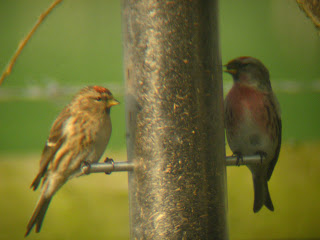 Following on from the recent posts about Redpolls I thought it was time for an over=view of the group's activities with these species so far this year. We have been catching at four feeding stations, ringing over 250 Siskin and ca 200 Redpoll since January. To date we have caught eight Redpoll and four Siskin that have been ringed elsewhere.

Pride of place goes to the Stavanger (Norway)ringed Redpoll caught at Thrushgill. But the local movements recorded suggest quite a mobile population with four Lesser Redpolls moving between our feeding stations. Of these two moved 34 kms, one within just three days,

We await with interest receiving the ringing details of the other birds. That is four each of Redpoll and Siskin along with two Goldfinch caught at the same time.