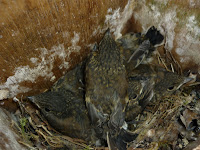 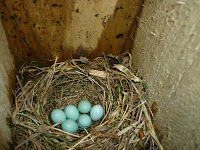 Our Pied Flycatcher study in the Lune Valley Woodlands has had a very successful season. In total we have ringed 278 nestlings from 40 broods. we also caught 55 adults. Of these one had been first ringed in 2005, six in 2007 ten in 2008 and 13 in 2009.
Many birds ringed as nestlings return to the area in succesive years . Of 11 birds ringed as nestlings in 2009 only three returned to breed in the wood in which they were reared with eight moving to diferent woods. Adults were quite site faithful though, of 18 caught as adults in 2009 all but four returned to the same wood to breed again.
Perhaps the most interesting finding this year was made by Kevin Briggs. He proved that pairs do occasionally have second broods. A pair which fledged their first brood in early June and were both caught at the nest box had a second brood in the same wood with the young flying in mid July.