An adult female Reed Bunting ringed by Paul Robinson at Helton Tarn on 11 May 2009 was caught by Bill Jones at Kingsnorth Power Station, Hoo St Wexburgh in Kent 0n 2 February 2010. This is a movement of 392 km and the longest movement recorded for a Reed Bunting within our area. We have one other similar movement to Dorchester in Dorset a movement of 386 km. It also was a female but was found in early October.

We have seven recoveries in winter within the Merseyside/Cheshire area suggesting this is the more usual wintering area for our birds also one a little further afield near Nottingham.
Possibly the severe winter had forced this bird to move further south than usual, although it would find much more snow in Kent this past winter than at Helton Tarn, although there was less on the Grain Peninsula than even the only slightly upland downland nearby! 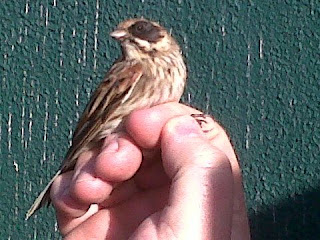