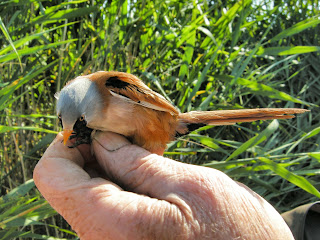 It has been a very successful season for our Bearded Tit Study at Leighton Moss RSPB Reserve.


Breeding Population and Survival
The breeding population increased from 18 pairs in 2008 to 26 pairs this year.In total we re-trapped or sighted 27 adult males and 18 adult females. Suggesting a small surplus of males. Females appear to be harder to catch than males. Survival of adults from 2008 was extremely good with a survival rate of at least 73% - one of the best rates to date. Survival of 2008 young was also good at 59%

Productivity
This was excellent with 103 fledged young ringed - the best number since the population crash in the 2000-2001 winter.One unusual feature was the catching of 2 birds still in juvenile plumage as late as October 17th. Suggesting a very protracted breeding season.

Re-traps and Grit Tray Sightings
We recorded a total of 323 re-traps and no less that 337 sightings of colour ringed birds. Previous postings have detailed the grit tray sightings. The only addition is that a few birds have continued to visit the grit trays in January, the first time we have recorded them so late in the season. The birds appear to have survived the cold spell well, there were 9 birds around the tray on Sunday.