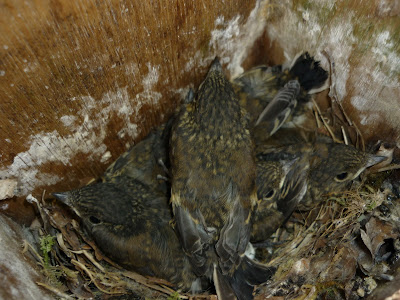 One of the Groups major studies is of pied flycatchers. Within the Lune valley woodlands we recorded 57 occupied nest boxes this year. Most were very successful and 264 nestlings were ringed. We also caught 50 adults at the nest boxes of these 30 were already ringed. Breeding birds appear to show a remarkable site fidelity with 12 ringed as adults caught back in the same wood the following year many of them to the same nest box, only 1 moved and that was just 2 km. Many nestling also return to the wood where they were borne of 18 birds ringed as nestlings 8 returned to the same wood and 10 moved only to the next wood. Three were a little bit more adventurous moving between 20 km and 8 km.

However we caught 3 birds which were not ours being marked by other ringers outside our area. A look through our files shows that many nestlings do not return to their natal area. Over the years we have had 24 records of nestlings that moved away to breed in their first year. Of these 10 moved under 50 km 7 between 50 and 100 km, 5 between 100-200 km and 2 over 200 km. Three adults have also moved, 2 between 50 and 100 kms and one female moved 261 kms to Powys.

Hello John
Is it not reasonable to say that the current distribution is away from the Lune itself and concentrated along the middle & upper sections of the Roeburn & Hindburndales?