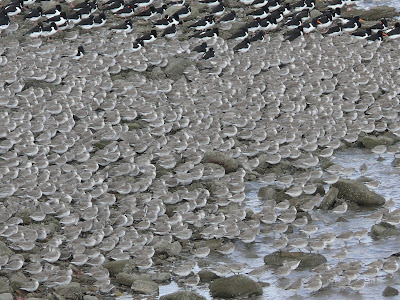 A large number of recent Knot recoveries and colour ring sightings prompted me to review what local ringing by the Morecambe Bay Wader Group has discovered about this abundant winter visitor to Morecambe Bay.
1) Breeding Area The 16 recoveries within the Greenland breeding area during May to July show this to be the main destination of our birds. Most of the recoveries are on the west of Greenland ( the side nearest to Canada). We also have two recoveries in June on Ellesmere Island Canada both were caught on the nest then
released. The distance between Morecambe Bay and Ellesmere Island is 3400 km.

2) Spring Migration Birds start to leave the Bay in late March on through April. They obviously use Iceland as a re-fueling halt for we have 26 recoveries in May and 1 in late April. Almost all of these were caught and released. We also have 10 reports from northern Norway at this time of year. So this area is also used as a stop over point. All these birds were either caught and released by ringers or were sightings of colour ringed birds. The only other reports we have at this time of year are one each in Germany and The Netherlands.

So Knot make this amazing circular migration of around 7000 km. from the Bay to the breeding grounds and back.
Posted by North Lancs Ringing Group at 20:08