One of the fascinations of ringing the same  site over the years is the ability to compare  years to get an idea of the population trends and productivity  of the species you study. At Leighton Moss RSPB Reserve our main study is the isolated population of Bearded Tits. This year has  been good, for so far we have ringed 54 juveniles compared to 48 in the whole of 2013 and just 11 in 2012 and there is quite a time to go yet.

The main spin off of this study is the RAS we run on Reed Warblers. Our initial feeling was that the breeding population was down somewhat but this month they have bounced back with a total of 517 handling's compared with just  281 in July 2013 and an average of 380 over the past three Julys. This suggests excellent productivity. To date we have caught 153 adult Reed Warblers, this compares to an average of 190  over the 17 years of our study. We usually catch fewer in August as adults start to leave early in the month. The only two adults that we caught this morning were obviously preparing to leave for they had fat scores of 2 and 4 and were well above average weight, don't think they will be going anywhere over the next two days if the weather forecast is anything to go by!

By contrast Sedge Warblers are well down with only 79 ringed compared to 182 in  the same period last year. There is only a comparatively small breeding population of Sedge Warblers at Leighton. Recoveries suggest that most of the birds we catch are migrants from further north. Perhaps they are later this year or possibly weather  for migration has been so good they have not had to stop off at our site. Willow Warblers fall into the same category being mostly migrants .  This July we have ringed 114 compared to 85 last  year.

In case you are thinking that some of the recorded changes from year to  year are due to varying effort-we ringed on 18 mornings in 2013 and 17 this year.
John
Posted by North Lancs Ringing Group at 17:31 No comments:

Numbers of adults caught start to drop in late July and early August and most have left before the end of August.  We have 6 controls of adult Reed warblers on the south coast in the second half of July, 11 in August and 3 in the first few days of September. By contrast juveniles don't occur there until the middle of August and reach a peak in the last days of August and early September and continue into September. Almost  all the juvs caught today were in post juvenile body moult and had normal weights.

The other amazing thing about todays catch was the complete  absence of Sedge warblers on the same date last year at this site we  caught 8.
John

Posted by North Lancs Ringing Group at 17:33 No comments:

Where are the Sedge Warblers?

To date we have only caught 21 Sedge warblers in our study of reed bed birds  at Leighton Moss RSPB. This compares to 61 up to the same time last year. The good weather has allowed us to make more visits and this reflects in the catch of Reed Warblers on our RAS study- 329 compared with 182 in the same period last year. So in theory the Sedge  Warbler catch should be higher

Judging from recoveries, most of our catch of Sedge Warblers are migrants as opposed to Reed Warblers which are mainly birds bred on the reserve so it will be interesting to see how the season unfolds. Lets hope the weather continues  good.

We have now equaled the total 2013 catch of 48 young Bearded Tits with some of the best time for catches to come. All the recent catches have been of later broods and the first brood young have started to moult making them difficult to catch. Bearded Tits are one of those species which renews their flight feathers in their first  year.

John
Posted by North Lancs Ringing Group at 11:12 No comments:

After a period of very low catches (see my last post) with catches as low as 2 per session. Reed Warblers have come good over our last three RAS catches. This culminated in todays catch of 47 which consisted of 11 adults and 36 Juveniles.

Sedge Warblers though have so far been low with only 19 caught to date. Most of the birds we catch are passage birds so may be they are  rather late this year. Bearded Tits though  are doing well with 45 juveniles caught compared with just 48 in the whole of 2013.
John
Posted by North Lancs Ringing Group at 16:52 No comments:

Bearded Tits appear to have had an excellent season at Leighton Moss RSPB Reserve. To date we have caught 42 juveniles which compares with just 48 in the whole of 2013. Young Bearded Tits can be aged by their iris colour which changes from dark brown to  yellow  with age. Using this data almost all the ones caught to date are from the first  broods but in our  last catch on July 1st out of the 9 caught 4 had dark brown eyes and were obviously second broods.The first photo shows an older male with a yellow eye, while the second is of a very young female  with dark brown eye. 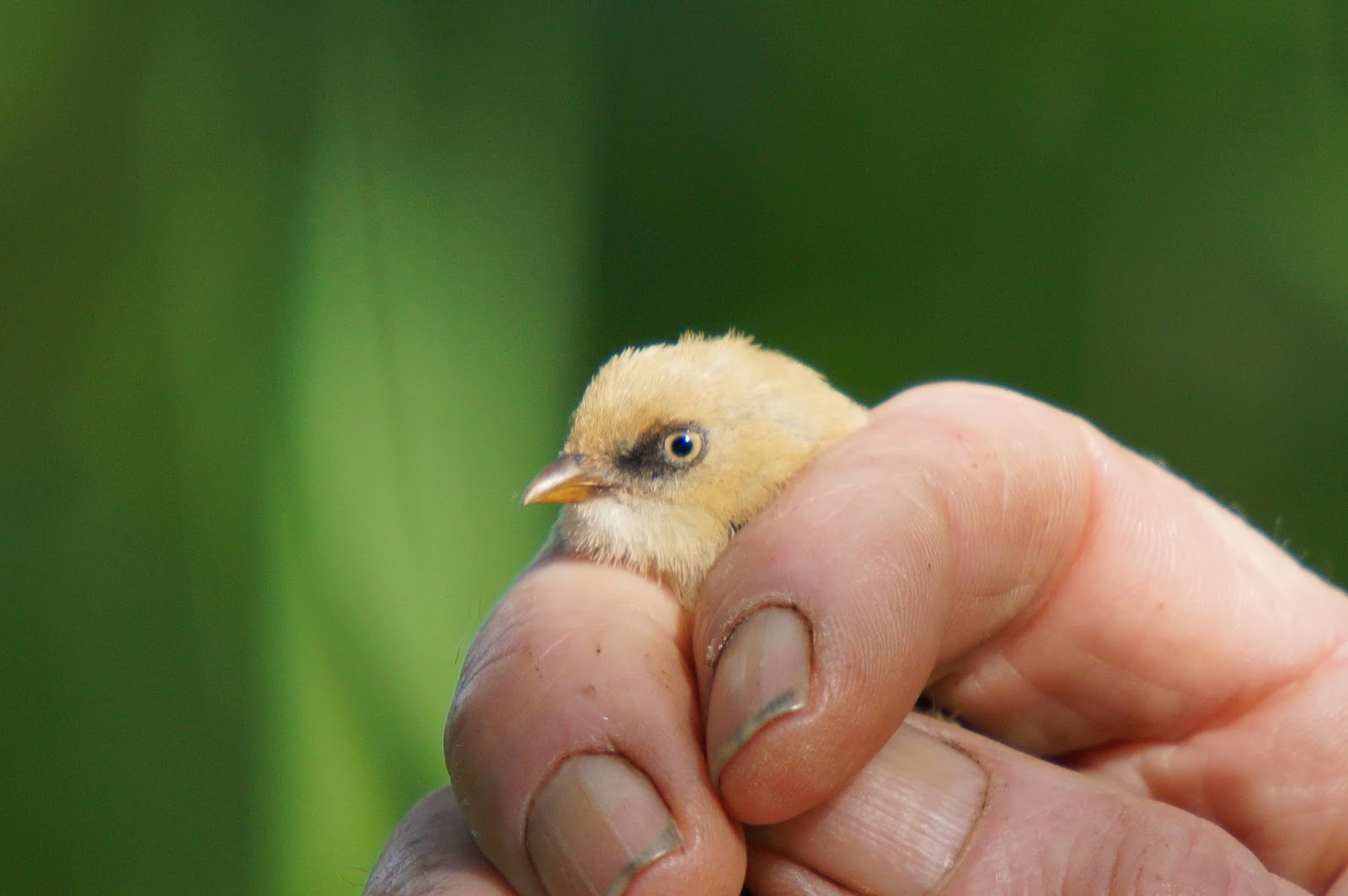 Our Reed Warbler RAS got off to a good start and to date we have caught 76 adults (44 new birds and 32 retraps. The retraps included a six year old and a five year old.
Young birds started to appear quite early on 21st June but since then catches of both adults and juveniles have declined especially at two of our sites which are normally good for this species. One possible explanation is that the reed bed is in better condition this year  because of only little damage over the winter by roosting Starlings. For the previous five or so years large areas of the reed bed have been devastated by the Starlings rendering them unattractive  to  breeding Reed Warblers and concentrating the early breeders at least in the remaing good areas close to our ringing sites. This year they can spread right thoughout the reed bed.  However only our visits over the next three months will tell. Would be interesting to know how other Reed Warbler ringers are finding the season.
John
Posted by North Lancs Ringing Group at 19:25 No comments:

A colour ringed Greenshank has  frequented the Eric Morecambe Pool  at RSPB Leighton Moss since June 26th. It was ringed by the Highland RG on the breeding grounds in Sutherland on June 4th.  Ron Summers reports that it was an unsuccessful breeder which probably accounts for it quick move away from the breeding area. It will be interesting to see how long it stays and if it remains on the pools to moult. It was also fitted with a geolocater  which if it can be trapped again next year should tell the full story of its migration  and wintering area. 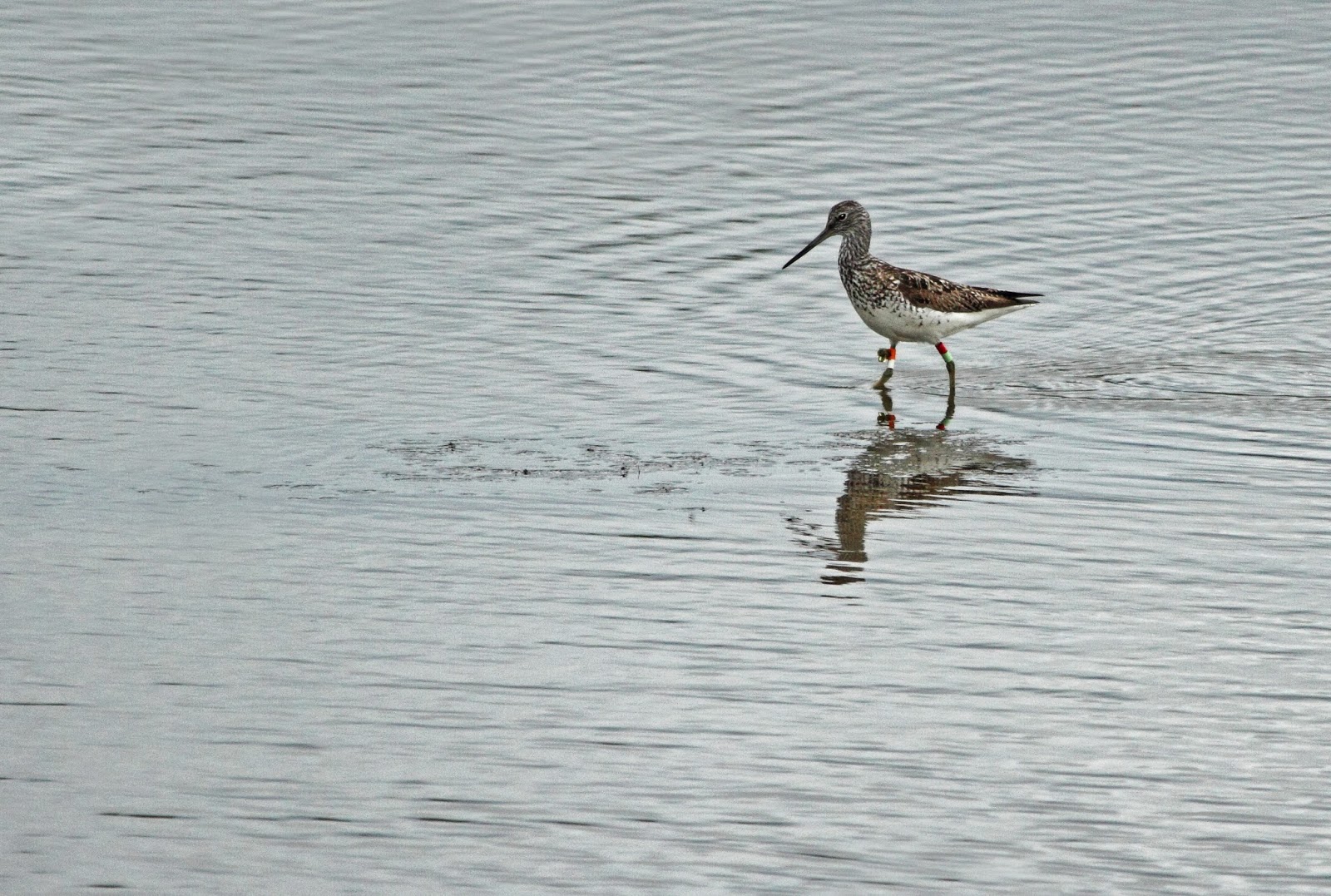 Thanks to Janet Dewhirst for the photo.

This is the second colour ringed Greenshank to visit the Eric Morecambe Pool. The previous one was  ringed as a juvenile in Aberdeenshire in September 2007 . It spent the following winter in  Donegal Ireland. But it appeared on the Eric Morecambe Pool  on 21st June 2008 and moulted there until late August. In 2009 it returned on 28th June and again moulted there being last recorded on 20th of August. It will be interesting to see if the present one follows a similar route.

John
Posted by North Lancs Ringing Group at 19:27 No comments: