With over 450 handled so far this year,Siskin still head the Group's ringing totals. The cold spring has held them in gardens. Spring passage usually ceases by mid April but they are still being caught at our two main   sites  Andrew's and Mark's gardens.

A recent batch of recoveries included five reports of Siskin. the  outstanding one was a juvenile ringed in our area on 20th June 2011 was found dying in Quebriac Ille-et-Vilaine France on 10th March 2013. 638 km south.This bird was almost certainly bred in our area , part of the small but expanding breeding population. This is only our second recovery of a Siskin in France. The previous one was ringed in the same area in France on 1st April 2002 and caught in Andrew's garden almost two years later to the day. Another juvenile bird ringed on 14th July in Marks garden was  found wintering in Wiltshire, again this was probably a locally  bred bird.

John
Posted by North Lancs Ringing Group at 17:31 No comments:

Bearded Tits Do it Again

Spent a wonderful two hours this morning watching a pair of Bearded Tits feeding their well grown young in one of our reed wigwam nest boxes at Leighton Moss RSPB Reserve. The weather was fine when I set out but it started to rain  and the change in behavior was interesting. Despite the young being well  feathered and  ca three days off fledging, and in the nest box they are completely sheltered from the rain, the adults still spent quite some time brooding once the rain started.. Most natural nest sites are open to the weather so they  would need to provide some cover in these circumstances. What an advantage in this cold spring these nest boxes must be! The adults had no problems finding food, the reed bed was alive with flying insects.

When I got back home, my data base revealed that they had both been ringed as juveniles in 2011, both were sighted on the grit trays on many occasions in the autumn of 2011 but never together.  However in the 2012 autumn they were seen together acting as a pair on 15 occasions between  28th September and 21 November. A phone call to Alan Gallagher and he e-mailed the attached picture of these two birds together, one of five photos he had taken in early November 2012 on the grit trays. Another case of birds staying in pairs throughout the autumn and winter. 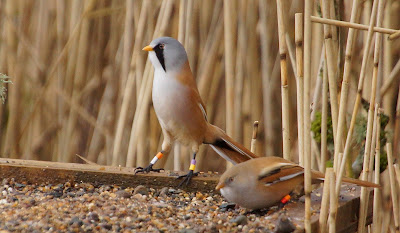 The RSPB have a Web camera on this nest  so you can watch the action on the Leighton Moss Web Site.
John
Posted by North Lancs Ringing Group at 18:28 No comments:

Our first young  Bearded Tits of the year should fledge shortly, we ringed the first brood this morning. We read the colour ring combinations of one  pair with young and found they were both ringed as juveniles in summer 2011.  In the following winter they were seen together on the grit trays on seven occasions acting as a pair. We never located them during the 2012 breeding season but on 28th September 2012 they were back at the grit trays together and  were seen together again acting as a pair on  six occasions  during the next two months. Alan Gallagher's  photo shows them together on the grit tray on November 8th 2012. 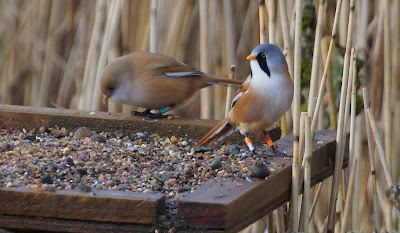 We have had several similar observations of other pairs all suggesting that Bearded Tits remain as a pair throughout the year.

John
Posted by North Lancs Ringing Group at 14:09 No comments:

With 1487 birds ringed so far this year it came as something of a surprise to find Siskin top of the list with 373 ringed to date. All have been ringed in gardens and remained there in numbers until the milder weather of the last few days. This compares with 172 in the whole of 2012 showing what a good season it has been for this species.
Of the 373  caught  12 birds were already ringed so we look forward to getting full details in time. Previous recoveries of birds caught in our area in late winter/early spring have been mainly  from wintering sites  in the south of England ranging from Suffolk and Kent through to Hampshire.  These birds are heading for the breeding areas in  Northern Scotland (10 recoveries) or Southern Scotland (7 recoveries) with one killed by a cat in southern Sweden.
In total we  have had 68 retraps. Almost all were within a few days of ringing. But five had been ringed in the east of our area in Bowland in the previous July and August and retrapped in February and  March in the same area. Siskins have recently colonised our area and appear to be spreading into the many maturing conifer forests so may feature more in our  future ringing. 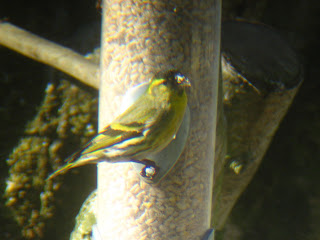