freezing the nuts off! 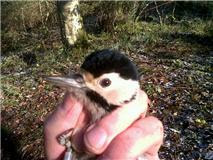 Far fewer birds in my trip to the woods this morning than last week (only 29, of which only ten were new birds) but surprisingly, FOUR Great Spotted Woodpeckers - more than I usually catch in a year.

Gosh, my figers don't half hurt now - they can peck like mad and one of my fingers would have been bleeding faster than it did - if it hadn't been freezing cold this morning!

Paul
Posted by North Lancs Ringing Group at 21:10 No comments:

Earlier this year, I mentioned all the satellite-tracked Ospreys which had passed over this area on the 2010 spring migration. I have just had a look on the Highland Wildlife site to see what happened on the autumn migration and most of the same birds took a more easterly route with just the one (Red HT) in ‘our’ area: “following the M6 down to Tebay services, then cutting across towards Ingleborough before heading for east Lancs”. A look at the weather maps at the time showed a lot of strong westerly winds, so sheltered migration routes to the east of the Pennines were the order of the day. Let’s see what happens next spring.
Posted by North Lancs Ringing Group at 20:46 No comments:

Busy morning in the woods 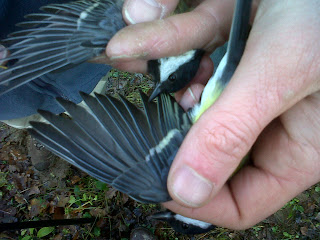 Work has got in the way recently and I haven't been able to get to the woods as often as I would have wished, so it was good to get there this morning. A lovely, peaceful morning which produced 73 birds, 70 of them tits. Very heartening to catch birds from previous years and the number of young tits, especially Blue tits, backs up suggestions of a very good breeding season followed by good post-fledging survival.

Hopefully, there will be some more mornings to come between now and the end of the year

paul
Posted by North Lancs Ringing Group at 20:08 No comments:

Cetti's Warbler have not as yet been proved to breed in North Lancashire. The first record was one ringed at Leighton Moss in October 1995. Singles were also caught there in the autumns of 2007 and 2008. This increased to four in the autumn/winter of 2009/2010.

At least two males were singing throughout March 2010 but the last one was heard on April 3rd. However this autumn has been outstanding for between September 18th and mid October we have caught six birds. Of these four were newly ringed and two were re-traps from previous autumns. One from September 2008 and the other from October 2009.

So are these two birds returning winter visitors? Or did they breed undetected and the four newly ringed birds are locally bred. Certainly there are many suitable areas difficult of access on the Moss where they could have bred undetected. However one would perhaps have expected us to catch young birds earlier in the season.
John
Posted by North Lancs Ringing Group at 17:48 No comments:

Arrivals of Twite on their way to wintering grounds on the Lune Estuary marshes and further southwards in North Lancs is in progress. Last autumn/winter, although many Twite arrived in the Heysham area, there was a tendency to remain hereabouts, resulting in a high proportion of retraps later in the period. The pattern is beginning to look a little different this year with more birds moving through. This should result in more new birds being trapped, with fewer retraps (as seems to be the case so far).

During the Autumn, a large number of Twite were trapped and ringed at Macrihanish Bird Obs on the west coast of Scotland. Since some of our birds have previously been controlled there in the summertime, we hoped that some of their ringed birds would pass through Heysham. That has indeed occurred, with 2 birds (1CY Males) being controlled here already.

A recent batch of recoveries included the first two from our ringing of 1440 Swallows this year mainly at a roost in a maize field.

The first one from Hampshire, 389 km to the SSE just 19 days after ringing in early September, was obviously heading in the right direction. The other though was ringed as a nestling on June 12th this year near Hoylake on the Wirral. It was caught in our roost 79 days later and 88 km to the NNE. This is not the first Swallow we have had to show a northerly movement at a time you would expect them to be heading south. A nestling ringed in Staffordshire on 10th June 2005 was controlled in our roost on 30 August the same year and 191 km to the north. Perhaps even more surprising was a juvenile ringed in Lincolnshire on 26th August 2004 and caught four days later in our roost 186 km NW.

This type of movement has been recorded in a variety of species. Members of our Group who take part in vis.mig. watches tell me that N and especially NW movements of Swallows in some numbers have been recorded in most recent years and is often linked to unfavourable migration weather.

John
Posted by North Lancs Ringing Group at 19:36 No comments: 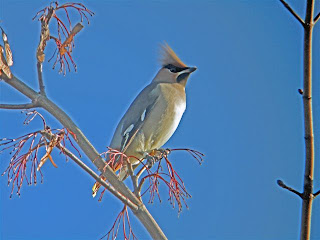 Thanks Rob for this excellent sighting/documentation!

This fits in with the impression that this autumn's irruption has so far involved a lot of birds whizzing through/over sites without settling. This seems to have been changing in the last few days with some birds discovering good rowan crops
Posted by North Lancs Ringing Group at 21:21 No comments:

The grit trays just off the Causeway at Leighton Moss have been very popular this year with both bearded tits and bird watchers. At times there has been even more of the latter than the former! The record for bearded Tits is ca 12 birds at once but for bird watchers at times up to 40!

Our individual colour ringing has really paid off this year and thanks to the efforts especially of Keith Kellet but also Andrew Cadman Alan Gallagherand Pat Bowskill we have logged 580 sightings up to the present To date a total of 112 different birds have used the trays these are made up of 50 adult birds out of a known ringed population of 76 birds and 62 juveniles out of 104 ringed this year.

Like previous years there has been a marked difference in the makeup of birds visiting. The season started on September 20th with two adults. Of the 108 records to the end of September only 18 were of birds ringed this year. Slowly the numbers of young birds increased through October with birds from the early broods coming first, and second and latter broods not gritting until early November. Of the 60 birds recorded over the first week of November 32 were birds of the year.
The number of days that birds visited the tray is also very variable. The record this year is held by female Green over white Red over BTO. This bird has been recorded on 18 different days. Like others she started early in the season missed five days in the middle of October then visited almost daily in late October and early November.

One interesting finding is that pairs regularly visit together.Male X579210 and female X579211 ringed together as juveniles on 6/8/09 are typical. Probably second brood youngsters in 2009 they were only recorded on three days in early November at the trays but in each other’s company. This year they have been recorded- always together on 13 days between early October and early November.

John
Posted by North Lancs Ringing Group at 10:30 No comments:

A Look Back at the Summer and Autumn

Given that the ringing at our three main sites tends to be reasonably consistent from year to year our catches of many species should give an idea of productivity for those species which we catch in reasonable numbers.

With all returns now in all the indications are that 2010 was a good breeding season for most of our warblers. Below I list the numbers of new birds ringed this year compared with the average catch over the past three year which are shown in brackets.

Catches of many of our residents also suggest good productivity especially Blue, Coal, and Long-tailed tits and Goldfinch.

John
Posted by North Lancs Ringing Group at 15:10 No comments: