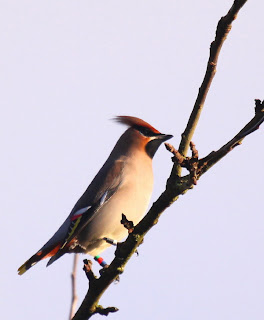 Photo David Talbot
The 200+ Waxwing frequenting Leighton Moss in early December have now declined to 30-40. One of the birds (shown above) photographed at Leighton Moss had been colour ringed in Dyce Aberdeen on 31/10. It was an adult male. It was seen at Leighton Moss on 14/12 334 km SSW. This bird has now been sighted at Ely near Cambridge on 24/12 a further 284 kms further south.

Raymond Duncan who is organising the ringing in Aberdeen reports that many colour ringed birds have reached the south coast with 4 in Kent, 2 in Dorset, 2 in Hampshire and 1 each in Somerset and Isle of Wight.

John
Posted by North Lancs Ringing Group at 17:41 No comments: 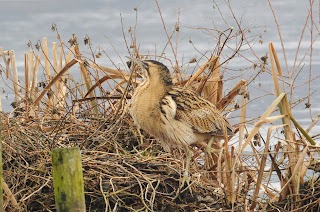 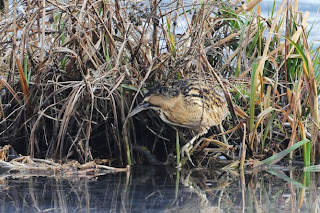 The photographing of a ringed Bittern from Lilian's Hide Leighton Moss on December 15th by Stan Parrot established 1291702 as the longest lived ringed Bittern in Britain. It is ten years and 221 days since it was ringed

This bird was ringed as a nestling at Leighton Moss by the RSPB Research Department on May 5th 2000, and on DNA evidence was sexed a female. The improvement in camera and telescope technology in recent years has allowed the reading of the rings of ringed birds in the field. Using these methods this bird has been identified on one occasion in 2007 and twice in both 2008 and 2009 and now twice in 2010. Prior to the recent sighting it was last recorded on 31 January 2010.

All the certain sightings of this bird have been in the period October to January. However ringed birds have been seen at Leighton Moss during spring and summer but not identified with certainty. It is much more difficult to get photographs showing the ringed leg during the spring and summer when the legs are often hidden in the vegetation. The best time is during cold spells when they often walk on the ice,

The Wardens at Leighton Moss are putting out sprats to help tide the bitterns over the present cold spell. This bird was seen to disappear into the area where the sprats are being provided. Excellent views of at least three Bitterns from Lilians hide have been obtained recently.


John
Posted by North Lancs Ringing Group at 17:52 No comments:

Over the last few weeks we have received some recoveries from the BTO and some foreign colour ringing schemes. The highlights are below:

Little Egret:
2 ringed as chicks near Bangor were seen and identified from their colour rings near Cockersands. Both were ringed this summer and brings the total from that colony to the area to 5 individuals.

Black-tailed Godwit R8-OG
07/07/2010 Lambadalar NW Iceland
26/09/2010 - 17/10/2010 Eric Morecambe complex
09/10/2010 Dee Estuary
Another Icelandic Black-tailed Godwit to the area from Iceland. Of more interest is the rapid within winter movement to the Dee. This is becoming a regular event with well over 50% of the birds seen at Leighton also being seen on the Dee showing that Morecambe Bay and the Dee estuaries are heavily both important for the same individual birds.

Bar-tailed Godwit Y1WYBR
18/10/2001 Schiermonnikoog, Netherlands
14/11/2010 Glasson
The is the first foreign ringed barwit to the area. The only other record of Bar-tailed Godwit in the area was ringed on the Dee.

Reed Warbler Z49451
19/08/2009 Handarribia Spain
12/07/2010 Middleton
Our third Reed Warbler from Spain. A very nice movement showing how early Reed Warblers leave the UK as juveniles if they possibly can.

Goldcrest CDR913
12/10/2010 Heysham
20/11/2010 Finningley, Doncaster
Another rapid movement of this tiny species. Rather unusual for one to move east during autumn. A movement in the opposite direction with these dates would be considered 'normal'!

Chiffchaff BXC640
21/09/2008 Middleton
06/05/2010 Batschuns Vorarlberg (Austria) 1158 km SE
A lot can be said about this however it is purely guesswork so I'll stick with saying it is the first BTO ringed Chiffchaff to be recovered in Austria!


Thanks to Tony Cross, Pete Potts (and the Icelandic Godwit project), NIOZ, Richard Smith and Grampian Ringing Group of the details of resightings. 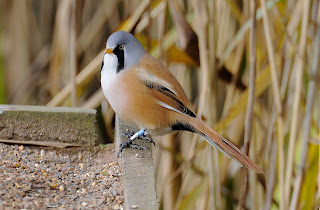 With the onset of the cold weather we have finished our ringing of Bearded Tits for this year. The cold weather with snow also appeared to cut short the gritting season.

It has been a very successful year for our long term study of this isolated population which we have been studying since they colonised in 1973. We estimate that 30 pairs of bearded tits have nested on the reserve this year, four upon 2009. In total though we have caught or identified by colour rings a total of 49 adult males and 28 adult females. The surplus of males appears genuine for of 41 adult males caught during the breeding season 27% had not developed brood patches so were probably not paired.

A total of 104 free flying young were ringed just one up on 2009. Survival has been very good for of 67 young birds ringed before they moulted in late July no fewer than 65 were caught or identified in late September/October.

The grit trays were well used this year a total of 726 sightings were made. This involved 122 different birds. Of these 62 were adults and 60 birds of the year. Many birds (47%) visited on only one to three days but a sizable proportion visited more often including one record breaker which visited on at least 22 days. Adults visited from the start of the season in late September and birds of the year only started visiting in numbers in mid October.

John
Posted by North Lancs Ringing Group at 19:31 No comments:

a Blue Tit ringed as a nestling in a box in Roeburndale near Wray this year has been caught twice in my garden in Lancaster. If it moved through Littledale, this will have moved about 14Km (a crossing directly over Clougha seems unlikely). One of the old papers on Blue Tits said that they would not cross open ground the size of a football pitch - this one clearly hasn't read the script!

This isn't the first of our Blue Tits to make this type of journey, but it does show that urban gardens hold birds (even sedentary ones) from a surprisingly wide radius

paul
Posted by North Lancs Ringing Group at 09:39 No comments:

warming up in the woods 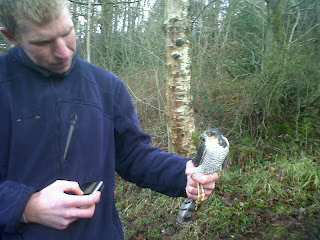 15 degrees warmer at Wray than it was on Thursday. A pleasant morning's ringing saw plenty of retraps, as expected, but also plenty of new birds. This poses the question: where do they come from as there are a number of us ringing pulli in the Roeburn Valley, yet I seldom catch anyone else's birds and hardly ever catch birds from my boxes a mile upstream.

Today was one of the better days for variety of species with Great, Blue, Coal, Marsh, Long-tailed Tits, Chaffinch, Dunnock, Nuthatch, Lesser Redpoll oh, and one of these .....
Posted by North Lancs Ringing Group at 18:59 No comments:

The promise of milder weather initiated a visit to our Woodland Feeding Station near Storth. Two short nets cover the feeders and our second net round produced only the second Brambling for the site. But this adult male was different- it was already ringed! In 50 years of ringing our group has only ringed a total of 308 Brambling and just 12 over the past ten years- and this is our first control. So we wait with interest the ringing details of this British ringed bird.

It was a good morning with 57 birds caught, many from previous visits to the site including both Coal and Blue Tits in their fifth year.

So far we have made Seven visits to the site this autumn and early winter and some interesting statistics are coming out. Blue Tit is as usual the commonest bird with 79caught. But Coal Tit with 68 runs it very close. Chaffinch is next with 50 followed by Great Tit with 48.

These four species appear to have had a successful breeding season - all four are well up on the same period in previous years with roughly similar effort. The numbers of Coal Tits is quite exceptional 20 - 30 is the usual catch.

John
Posted by North Lancs Ringing Group at 16:39 No comments: